The Lepida network in Emilia-Romagna

The Lepida network in Emilia-Romagna 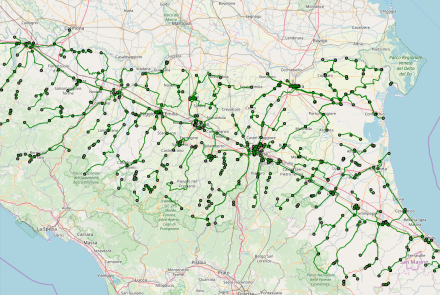 Last July, with the fiber connection of the City Hall of Morfasso, the last PALR was discontinued, that is the last copper PAL registered to a municipality. It may be interesting to show with some features the evolution over time of the Lepida Network from the point of view of the technology of its access points (PAL). At the end of 2010, the Lepida Network had 418 PALs: of these, 74% were in optical fibre and 9% in radio links (on the Lepida Wireless architecture, not yet in Ultra Wide Band). Where Lepida had not yet arrived, a connection to the CNER network was offered to the member bodies via a copper xDSL profile (acquired in an intercent-ER agreement) or via satellite access (with an affiliated operator). Already in 2011 the satellite PALs had been completely abandoned and 79% of the 450 PALs were in fiber, 10% wireless and the remaining 11% in copper. The number of fiber PALs continued to grow in the following years: 520 (2012), 636 (2013), 828 (2014), 1.045 (2015), 1.457 (2016), 1.734 (2017), 1.998 (2018); the wireless network of Lepida is also evolving, gradually migrating to a technology on licensed frequency: the PALW (PAL Wireless) have thus become PALB (PAL Broadband), with bandwidth up to 100 Mbps

Today, 2.239 access points out of 2.400 are in Ultra Wide Band (fiber or licensed frequency), while wireless technologies with lower bandwidth or on copper lines continue to be used in secondary offices of institutions; or in those cases (especially schools) where Lepida has agreements with other operators to provide the service where its network cannot arrive. If we limit ourselves to the connectivity brought directly from Lepida, today we can count, on the network, more than 2.300 access points, 95% of which in optical fiber, 3% in radio link and 2% on copper lines. In particular, of the 328 municipalities in the region, 312 municipalities are served by a PALF (PAL in Fibre) and 16 by a PALB. Therefore we can say that from July 2019 all the municipalities in the region are served by an Ultra Wide Band.